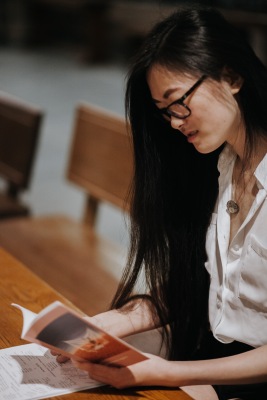 Kim Rooney (高小荣) is a Chinese adoptee from Jiangsu Province. She received a B.A. in English writing and a BPhil in Communication rhetoric at the University of Pittsburgh. For the latter, she defended her thesis, “Triple Nothings: Racial Identity Formation in Chinese-American Adoptees.” While at Pitt, she served as editor in chief of Collision Literary Magazine and copy chief of The Pitt News. Currently, she works as a video game writer for Pitt’s Laboratory for Child Brain Development. Her writing has appeared in The Offing, The Jellyfish Review, and Pittsburgh Magazine. She is particularly interested in the ways identity is constructed and maintained, and she enjoys experimental and genre-blurring art forms. When she’s not working or writing, she’s often cooking, crocheting, or running. Profits from sales of Kim’s booklist will be donated to SisTers PGH, a transgender centered drop-in space, resource provider, and shelter transitioning program based in Pittsburgh, PA. (Photo by Emma Vescio)

This collection of poems struck me with its honesty, beauty, and vivid imagery. It is filled with painful memories and relationships laid bare. “Headfirst” is the poem I find myself returning to most often: “When they ask you / where you’re from, / tell them your name / was fleshed from the toothless mouth / of a war-woman.” The only Chinese name of mine I know was given to me by welfare center staff, but these lines make me wonder if my birth parents have their own name for me.

I cried through the first 30 pages. This book offered a new vocabulary and framework for thinking and talking about my relationship with my birth parents and culture, particularly as it pertains to generational trauma and loss. It let me mourn parts of myself that I couldn’t articulate were absent until I read this book.

3. Her Body and Other Parties, Carmen Maria Machado

“The Husband Stitch” was the best story I read in 2017. I was thrilled to find out it’s the first story in this collection. It helped me process trauma, manipulation, and failures in various relationships, and it offered a lesson in writing about ghosts.

One of the most vivid things I remember from this is the image of a cord casting a shadow on the wall of the main character’s home. It struck me as incredibly real, and it reminded me to sharpen my eyes as a writer. To me, this book also exemplifies writing a character who doesn’t learn from their mistakes while avoiding the story becoming static.

5. The Remains of the Day, Kazuo Ishiguro
I originally read this as an assignment for a philosophy class. We discussed it in the context of what constitutes a good life, and I think the book also serves as an amusing and engaging example of writing an incredibly unreliable narrator. It also focuses on a paternal relationship, which I don’t think or write about as often as I do maternal or sibling relationships, so I like returning to it as an entry point into thinking about the topic.

My partner and I read this book together, and I was struck by the lengthy amount of time that passes in the book. Most of my stories take place over the course of several hours. Few go longer than two days. I return to this book when thinking about narratives that span decades, when stories start, what separates events from story, and where stories end.

I read “Black-Eyed Women” first, then had to put down this collection for several months to process it. The image of a small ghost boy swimming for years after his family who left him and their home behind haunted me, as ghosts are wont to do, and I wrote the first draft of what would become a story about two sisters chasing the ghost of their mother. I often return to this collection to remind myself how stories end.

Things that I enjoy about this book: surprisingly funny passages punctuated by even more surprisingly sad images, the structure that feels so freeing to borrow, the history that makes it so special to have been written and preserved, the professor who assigned it and the memories of her class.